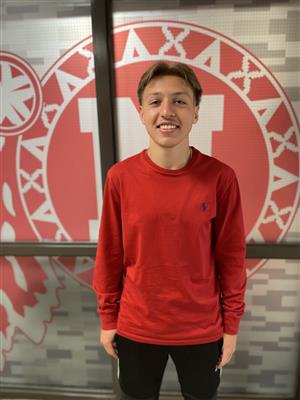 Ivan Ibarra is a high school senior and locksmith who plans to become a real estate agent once he graduates from college.

During his time at North, he played soccer and tennis. Although what he has enjoyed most about his experiences at North is being a part of the school's traditions, he didn't begin to participate in many of these activities until his senior year.

“Senior year is when I first started getting involved with the school and my teachers and it is something that I regret because if I had started earlier, I would have had four years to enjoy all this to the fullest,” said Ibarra.

Ibarra is sure that his years at North High will help him shape his future, since during his time at North he learned a lot about himself and met people who influenced him in a positive way. He is grateful to the teachers and staff at North High, who he considers wonderful people, for making him feel welcome and at home, especially Mr. Harris, his favorite teacher.

“Mr. Harris, my history teacher, was the one who inspired me the most,” Ibarra said. “I learned a lot from him.”

Ibarra said he would like to return to North in the future, maybe not as a teacher, but to talk to students about creating a path of their own.

Ivan is the first in his family to graduate from high school, but he hopes he won’t be the only one.

“My brother will be coming here next year and I am going to sign the tower, so I hope that in a few years he can see my name there too,” said Ibarra.

Ibarra plans to attend Butler Community College, where he hopes to earn a business degree and get his real estate license to start his own business.